I was watching Iron Chef the other night, and it was Battle Boar. Which totally doesn't interest me, because that's on the List of Animals I Won't Eat. But one thing that caught my attention was the marinade that either Bobby Flay or the contender used: maple syrup and pomegranate. I instantly turned to Dave and said, "What do you think of pomegranate cupcakes? Is it possible?" He shrugged and switched it back to the baseball game during the commercial. LOL

I started searching, to see if anyone else had the same thought, and had some luck. On the POM Juice website, they had a recipe.

Once mixed, the batter was very... soupy, for lack of a better word. I was half convinced it'd be a failure like the Carrot Cupcakes of last weekend. (Which we shall not speak of again LOL) Thankfully, they turned out very well, and I am Happy. :)

(Oh, and I halved their recipe, just in case it wasn't a winner LOL)

edited to add: I can't believe I forgot to mention the taste! I'm glad that I didn't cut the pomegranate juice down to half a cup. I think it keeps a good balance between the chocolate and the fruit taste. It's very yummy, I'm quite pleased with it. :) 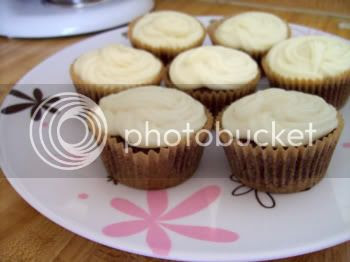 Whisk together flour, sugar, cocoa, baking soda, and salt in mixing bowl, making a well in the center.

Bake at 350F for 23-25 minutes, or until toothpick inserted near center comes out clean. Let cool on wire rack.

Beat cream cheese and butter until smooth. Add vanilla, milk, and sugar, and beat until frosting is of spreading consistency.
Posted by Kristen at 2:47 PM 1 comment:

Remember the good ol' days? When it was rolling towards September and you had both that mixture of sadness and excitement over the quickly-approaching first day back to school? (Alright, it's September back home. Out here, it's next week, I think.) I was one of those kids that actually enjoyed school, so it was definitely a mix of feelings. On one hand, I'd be going into (whatever) grade, and somehow I always got the teacher that I wanted, all the years of elementary school. But at the same time, when I think back on my childhood summers, it's all very vivid greens and blues and flowers. Sleeping in, playing house/restaurant/school/whatever with April or Erin, swimming in the pool, etc. Sometimes I really miss my childhood, and I do hope that when I have kids, they wind up with the same fond memories.

I digress. Of course. LOL

Really, those words and the recipe are connected, I swear. I think it's because the flavors of the bars remind me slightly of a peanut butter and jelly sandwich, even when there's no peanut butter. It's just a very comforting taste, and it works out well that's so super-easy to make. And, as I pointed out, there are oats in it, so therefore, there's healthiness. :) 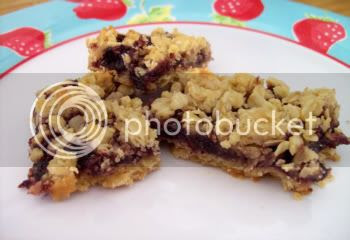 Press 2 cups of the mixture into the bottom of the pan. Spread the jam over this layer (close to edges, but not touching edge of pan as the sugar will burn). Sprinkle the remaining oatmeal mixture over the top and press lightly.

Bake at 350F for 22-25 minutes. Allow to cool before cutting into bars. Makes about 16 bars (depending on the size you cut them. I cut them small, thus making more, just because they seem better when bite-sized) :)
Posted by Kristen at 4:35 PM No comments:

In my quest last... whatever day it was that I made the blondies, I came across this recipe, but didn't have any cream cheese. This is what I first thought of for Myriam's Browniebabe of the Month contest. I didn't think it'd happen, so I just entered the blondies. But, yay, there was time enough, so after I post this, I'll be sending another email to Myriam. :)

These came out surprisingly well. My previous marbling experiences usually wound up... over-marbled, so I'm quite pleased with these. The peanut butter taste isn't too overwhelming, and it's a good balance between peanut butter and chocolate. I asked Dave if he wanted to bring some into work tomorrow, and his words were, "These aren't going to work. They're staying here!" Which made me happy, of course. I'll sneak some to my guinea pigs at work, though. 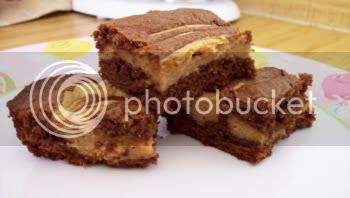 Stir together flour, baking powder, and salt; set aside.

Bake at 350F for 35 to 40 minutes, or until a toothpick inserted in center comes out almost clean. Cool completely in pan on wire rack. Cut into bars. About 36 brownies.
Posted by Kristen at 8:30 PM 1 comment:

I admit, it took me a while to come up with these. It wasn't until I went digging through the "pile o' morsels" that this clicked into my head. I'm not the biggest fan of Hershey's Cinnamon Chips, at least pre-baked, but they worked out really well in these. In fact, the flavor seems like it should be in something bread-y or muffin-y. Definitely not in bar form. Which is what I think is so great about these. Oh, and they're "guinea pig approved", too. I should make them a logo or something. :)

Anyways, I like these. Much better than the ginger blondies I previously made. These can be just a snack, or heated up and topped with ice cream. Ooh, a cinnamon ice cream would go perfectly! *covets* ;)

These are also for Myriam's Browniebabe of the Month event. :) 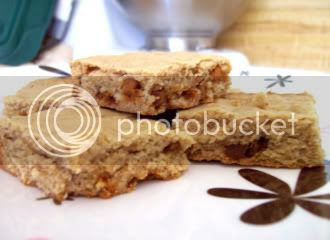