I found this recipe over at Baking Bites, about a month ago, judging by the posting date, and quickly added it to my "maybe trying" folder. I'm trying to get better about actually working my way through that folder instead of just always adding to it. :)

I'm a firm believer that whoever first put chocolate and marshmallow together needs to be sainted. But at the same time, I've never had an-honest-to-goodness, straight-off-the-fire smore. Yeah, yeah, I know. One of the 'essentials' of childhood to many people, and here I am, getting closer and closer to 30 (which is whole 'nother post to begin with!), and I never have.

But I'd like to imagine that these, especially when eaten before being fully cooled, so they're still gooey and messy, are pretty close to the real thing.

By the way, I'm adding "eating a real s'more" to my newly-created list of "Things To Do Before I'm 30". Which already includes getting married and having a baby. And taking my parents to Disney World. :)

Anyways, I digress. I used two different chocolate bars, one 'Evening Dream' Ghirardelli (I already had it lol) and one milk chocolate bar. Unfortunately, I forget which side was which. :) Also used less marshmallow creme, which turned out for the best. Right now, they seem to dance on that border between 'sweet' and 'too sweet'. More marshmallow probably would've pushed it over. I used probably about 5 ounces? I didn't measure, just scooped from the jar, spreading until I was satisfied. :)

Really easy to make, though. Maybe next time I'll experiment with other kinds of chocolate. 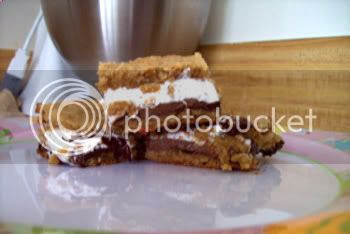 In a small bow, whisk together flour, graham cracker crumbs, baking powder, and salt; set aside.

In a large bowl, cream together butter and sugar until light. Beat in egg and vanilla. Add flour mixture and mix at a low speed until combined.

Divide dough in half and press half of dough into an even layer on the bottom of the prepared pan. Place chocolate bars over dough. Spread chocolate with marshmallow creme or fluff.

Flatten remaining dough and carefully place on top of marshmallow layer. (I spread it on the counter, shaping it into a square, then cut into four pieces. Once on, I pinched the dough together to make it look like one solid piece.)

Bake at 350F for 30 to 35 minutes, until lightly browned. Cool completely before cutting into bars. Makes 16 cookie bars.
Posted by Kristen at 5:16 PM No comments:

It really shouldn't have surprised me that my first time baking after vacation would have its difficulties. But, no. That never occurred to me. Let's see... I had softened the cream cheese in the microwave (I know, cardinal sin, but I had no choice). As I was about to put it into the mixing bowl, a piece of it 'exploded' and flew onto me. Did I mention I was wearing a tank top at the time? Yeah. Cream cheese burns.

Then, as I'm trying to grab an egg from the carton, it stuck a bit, so I applied more pressure. You know where this one's going, I'm sure. Egg, dripping onto my bare foot, down the front of my shirt and the front of my jeans. This is where I start crying because I have egg on my foot. And on the carpet. Finally get the egg off, Dave "edits" my egg-carton due to the broken one (which was not my fault! It was broken to begin with!) and gets the carpet cleaner out. And then I slip and nearly fall where the carpet spray hit the floor. Then start crying again.

*big sigh* It's probably good that Dave peeled and cut my apples for me, otherwise I'm sure I would've wound up in the emergency room. (Thank you, honey, for putting up with me, btw) ;)

Alright. Accidents aside, the recipe was pretty simple. I found it at Alpineberry earlier in the year and saved it in my "maybe trying" folder. With today's weather being rather autumny, I thought it was only appropriate.

The only thing I would do differently next time (and there will be a next time) is to add more spice to it. They're delicious as is, but I think some cinnamon or nutmeg would really jazz it up a bit. :) 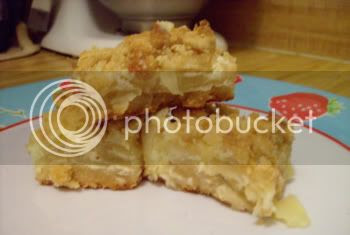 For crust:
Sift flour and salt. Set aside dry ingredients.

On low speed, mix in the flour-salt mixture and the 1/3 cup of finely chopped almonds just until the dough comes together. Dough should be crumbly.

Reserve about 2/3 cup of the crust mixture (for the topping). Press the remaining dough evenly into the bottom of the prepared pan. Prick the dough all over with a fork. Bake for 16-18 minutes, or until light golden. Remove crust from the oven.

For the topping:
While the crust bakes, make the topping by adding the flour, granulated and brown sugars to the reserved dough. Mix until well combined. It should be crumbly. Set aside topping and 1/4 cup coarsely chopped almonds while you make the filling.

For the filling:
In a large mixing bowl, beat the cream cheese and sugar until smooth. Beat in the egg, lemon juice and salt until well mixed.

Assembly:
Arrange the apple slices over the baked crust. Pour the cream cheese filling over the apples and gently spread the filling to cover. Crumble the topping over the filling. Sprinkle with the almonds.

Bake at 350F for 45-50 minutes, or until light golden brown. Let the bars cool in the pan for about 30 minutes. Remove from pan and cool completely on a cooling rack before cutting.
Posted by Kristen at 8:10 PM No comments:

We just got back from vacation yesterday afternoon. It was good. Spent a lot of time with my parents, helped around the house a bit (my parents were quite shocked when I wound up with 8 bags of garbage from the attic LOL), and relaxed. Spent a day in Newport (Rhode Island), since Dave had never been, and toured one of the mansions there (The Breakers). I've been to that one numerous times, but every time, there's always something that I hadn't noticed before.

I did do some baking, despite my dad's protests. He felt that since I was on vacation, I shouldn't be doing anything, despite how baking isn't work to me. I won out in the end, making my large-pan brownie recipe (which is posted somewhere around here), and my dad ate a good amount of them. :)

So I'll be back to my mostly usual baking/posting schedule this Friday. :D
Posted by Kristen at 5:18 PM No comments:

I've been having a bad time with headaches lately. Pretty much every day for this entire week, and a few times a week for a while before that. Dave told me after this morning's disasterous walk, that maybe I should take today off.

"No, I'll be fine," I insisted. Come on, with my heritage (English, Irish, Portuguese), of course I'm stubborn!

Thought I'd try something different. He wanted something with oats, peanut butter, and chocolate chips. Found one the other day.

I mixed it all together, found the dough to be a bit odd, but didn't really think anything of it. In, out of the oven. Looks decent enough.

It's not until he gets home from work and is about to put a slice of pizza in the microwave...

There's a bowl of melted butter in there.

Well, that explains the oddness of the dough, right? :P

There's a lesson in this, of course: don't bake when you feel like your brain is mutinying upon itself.

As a side note, on Tuesday, we fly out for vacation (Woohoo! I'm going home! LOL), and while I'll still be baking there, I have no way to upload photos. So, most likely I'll post the recipe and then do pics later.

Enjoy your labor day weekends! :)
Posted by Kristen at 8:26 PM No comments: