They all laughed at her.

The girl, very full from dinner (Mom made American chop suey), going from room to room, trying desperately to get some decent lighting, when it was rainy and dismal outside. Dining room, den, bedroom, kitchen, where the girl went, the giggles and comments followed. But did that deter her? No, it did not. She persevered. And while it might not be winning any awards any time soon, gosh darnit, the picture is the best that she could get.

All drama aside now. I came across Nigella's recipe for chocolate gingerbread well over a year ago. But whenever I was in the mood to make it, of course I was lacking in ingredients. A few web searches later, Scharffen Berger came to my rescue. I never realized they had recipes on their website, let alone exactly what I was looking for. :)

This comes together easily and oh, did the kitchen smell good while it was baking. I don't usually do gingerbread so early in the season, but with the rain we've had ALL weekend long, it works. It's a very dense cake, and would do well with some whipped cream. The chocolate is a nice addition to traditional gingerbread, and I think I'd like to see it in cupcake form, too. 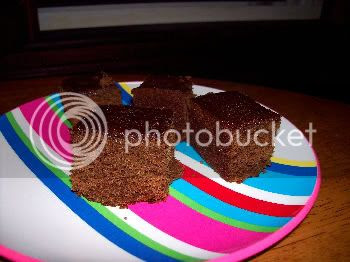 Put cocoa in a small bowl, stirring in 1/3 cup of boiling water.

Cream butter and sugar until light and fluffy. Add eggs, one at a time, then add molasses. Stir in cocoa mixture. Gradually add half of the flour mixture, then the remaining 1/3 cup of water. Beat in remaining flour mixture, beating just until incorporated. Spread into prepared pan.

Bake at 350F for 40-45 minutes, or until a toothpick inserted near center comes out clean. Let cool in pan before cutting. Can be served warm or at room temperature.
Posted by Kristen at 5:34 PM 1 comment:

This was part two of my weekend baking. The first one has been filed under "Experimental Baking: Category Two - The Gone Wrongs" and has been sneezed away. Needless to say, no Sugar High Friday this time around.

I wanted something simple, with flavors that most of my family enjoys. As most of you know, that means chocolate for my mom, peanut butter for Dave, and anything homemade for my dad. Which leaves me out sometimes, if I'm not wanting those particular flavors, but it's okay. Having other people enjoy what I make is just as good as eating it.

Found over at the Hershey website, it's a really, really easy recipe. I changed it up a bit, omitting the nuts and adding a layer of chips to the base prior to pouring in the batter. We had it tonight for dessert, after Dave grilled some delicious steaks. It's a really, really rich pie. I had the smallest piece, and am so glad that I did. The whipped cream helped (I'd like to tell you that it was homemade whipped cream, but I don't want to lie lol), but man! I'm not sure if I would make it again, or eat it myself, but everyone else was pleased, and that works for me. :) 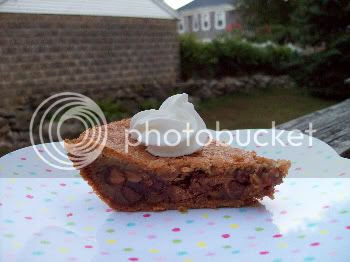 Bake at 375F for 35-40 minutes or just until set and golden brown. Cool completely on wire rack.
Posted by Kristen at 4:45 PM No comments:

This past week, we had our first little taste of autumn. Waking up in the morning, it was in the 40s. The high temperature was in the low 60s. There was just this crispness to the air that brought fall to mind.

I have mixed feelings on fall. For one, it means colder winter weather is coming. But at the same time, it evokes memories of shusheling through the fallen leaves, and the taste of pumpkin and apple, and just generally home-like scents. That is the best part of autumn for me. :)

When I saw the recipe over at Culinary Concoctions by Peabody, I don't know what made me smile more: the picture of the food or the pictures of her Cocker Spaniel and Bunny. Seriously, click now, read and smile, then come back. Go ahead, I'll wait.

Back? See, aren't they adorable?

Anyways, after seeing those bars, I bookmarked it instantly. Then with the aforementioned weather, I bought some pumpkin in preparation for making this.

And it really does taste like autumn should taste. I didn't quite have the amount of cranberries, so I just tossed in what was left in my bag of Craisins. It worked out, though. :) 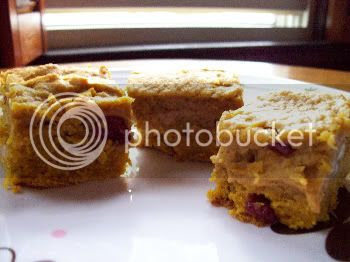 Bake at 375F for 30-35 minutes, or until a toothpick inserted near center comes out clean. Let cool completely before cutting into bars. Makes about 16 bars.
Posted by Kristen at 4:30 PM 2 comments:

I can't seem to remember how I first found the recipe, featured back in February in the Boston Globe. But it sounded yummy, so I saved it. (Huh. Exactly seven months to the day it was published. How bizarre.)

I had weird feelings from the get go. The batter looked funny before I added the dry ingredients, but I double-checked and everything was correct, so... just chalked it up to something being weird.

And I don't know if it was that weirdness in the start that just carried through or what, but the taste leaves a lot to be desired. And they certainly aren't as pretty as the ones on the Boston Globe website. The recipe is there, if anyone's interested, but these definitely aren't worthy in my eyes. *shrug*
Posted by Kristen at 4:21 PM 1 comment:

I decided that this weekend would be the day that I would finally use the new mini muffin pan. My mom got it for me from a co-worker who does Pampered Chef stuff on the side. Good deal. :)

After some fruitless searches, both in book and internet form, I found myself over at Baking Bites, and came across this recipe, and decided to half it. It's another one that comes together super-duper easy, although it does create a very sticky batter. I was a bit concerned, but it worked out well.

I only frosted half of them, and well, within ten minutes, they were all gone. I'm sure between Dave being home tomorrow and my dad, the rest will have "mysteriously disappeared" by the time I get home from work. :) 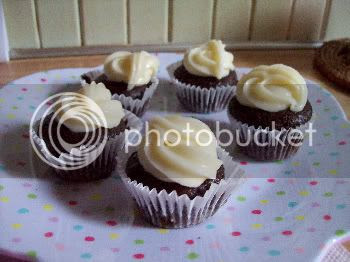 Whisk together flour, cocoa, coffee powder, sugar, baking powder, baking soda, and salt in a mixing bowl, making a well in the center.

Bake at 350F (/325F) for 10-12 minutes, or until a toothpick inserted near center comes out clean. Let cool completely on wire rack before frosting.

Beat cream cheese and butter until smooth. Add vanilla and milk, adjusting for consistancy. Add confectioners' sugar 1 cup at a time, until smooth. Spread or pipe onto cupcakes.
Posted by Kristen at 4:33 PM 1 comment:

Oh, man. I'm glad that this wasn't the first thing I baked yesterday. Because if it was? I would've taken it as a sign that the Baking Gods really didn't want me in the kitchen.

First, I put the flour in the wrong bowl at first. Had to switch bowls, wash the bowl out again. Then realized I didn't have enough nutmeg. In an attempt to add some more spice, when I opened the cinnamon, I forgot it didn't have the little, um, sprinkle-guard-thingie, and like two tablespoons' worth went in the bowl. Oh, and the piece de resistance? My buttermilk went bad. *sigh*

The recipe is originally from Mimi's Cafe, which is a great restaurant that's mostly on the west coast and midwest. They have a New Orleans feel to them, have a fabulous five-cheese grilled cheese sandwich, and you get a muffin with any soup or salad. And these aren't just ordinary muffins. Jumbo size muffins that are just... delicious. I'm a big fan of the carrot raisin, but this buttermilk one comes in at a close second. If you can get to a Mimi's, by all means, go! Have a muffin and think of me, all the way out here in MA, with no Mimi's for many, many miles.

Being that I had such issues with the making, mine taste nothing like the original. Substitution buttermilk never tastes the same as the real thing. That and the spice mix-ups, too. But, despite my fears, they don't taste all that bad. I just had one for breakfast, actually. The topping of sugar and cinnamon gets a bit crunchy, and that was my favorite part. :) 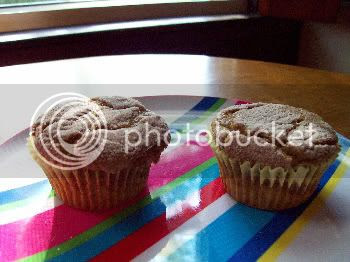 Whisk together flour, baking soda, and nutmeg; set aside.

Mix topping ingredients in a small bowl. Sprinkle 1 Tbsp. on top of each muffin right before putting the pan in the oven.

Bake at 375F for 20-25 minutes, or until a toothpick inserted near center comes out clean. Let cool on wire rack. Eat warm or cooled down.
Posted by Kristen at 6:19 AM No comments: