As I was walking home from the library today, I started thinking about the four bags of Hershey's Candy Cane Kisses my mom had sent me. Yes, you read that correctly. Four bags. I know. And I thought that, hey, maybe, instead of making the peanut butter cookies with Kisses on the top, I'd try a chocolate cookie base, and top them with the Candy Cane Kisses.

I went with this recipe as the base, since it said that the cookies didn't spread very much. I felt the batter tasted a bit funky, but hey, the pineapple cake batter wasn't my favorite either, but the cake came out delicious, so...

Thankfully I only made a dozen. I took two bites of the cookie before tossing it out. I'll let others try, just to see, but I don't think this is a winner. Back to the drawing board...
Posted by Kristen at 7:21 PM 2 comments:

Since I've moved out to California, on the day after Thanksgiving, I've brought a cheesecake to work. It's a nice little treat on the second-craziest shopping day of the year (I think Christmas Eve takes the title of the craziest, what with last minute shopping and all.)

Originally, Dave and I were just doing our own little Thanksgiving dinner, since his parents moved up to Oregon. He wanted pumpkin cheesecake for dessert, and of course, I obliged. (I do so love requests.) We wound up going over to his cousin's house, where, again, a pumpkin cheesecake was mentioned.

I lucked out, though. I used my own springform pan for our cheesecake. But for the 'travelling' ones, I just make them in the disposable pie or cake pans. Of course, those are shallower and hold less filling. So with one batch, I had enough batter to make two. Thus, three cheesecakes were made in two days. :)

It's a bit different than the recipe I used last year, and I find this one to be much better. With graham cracker crusts, I always add spices to it; never measured, but it's usually cinnamon, nutmeg, and ginger. Don't know what I did differently, but man, I'm in love with this crust.

And, as we started eating ours last night, I realized something... "Oh, poo, I didn't take a picture!" (I said something other than 'poo', but I do try to be ladylike on here lol)

Bake for 60 to 65 minutes, or until edge is set but center still moves slightly. Cool in pan on wire rack. Refrigerate for several hours or overnight. Remove side of springform pan.
Posted by Kristen at 1:02 PM No comments:

I just want to wish all readers a very happy and yum-filled Thanksgiving.

What do you do for Thanksgiving? What are some traditions? One of mine, since I was a little girl, is to watch the Macy's Thanksgiving Parade. I've got the Sesame Street float on right now. :) (Gotta say, it's great to see the same people that were on 20+ years ago!)

I'll probably post either tomorrow or Saturday (sadly, I'm working tomorrow) about the three cheesecakes I've made in the past two days. Just a variation on my usual Thanksgiving dessert.

Happy Thanksgiving! :)
Posted by Kristen at 10:02 AM No comments:

I woke up this morning knowing that I wanted to do something with pumpkin and brownies. Searched around for a bit with nothing that resembled what I had in mind. So I walked to the library, like I normally do with my Fridays, still thinking about the texture and image. I felt like I had one before and could see it perfectly in my mind.

Got home and started looking through my old folder, and sure enough, I found it. It was the first recipe that I put together myself. On November 17th, 2003. Isn't that appropriate? Almost four years to do the day. :)

Somehow I don't remember making such a mess the first time. LOL Still don't know how I wound up with brownie batter on my elbow. But they tasted the same. Very moist. A good combination of pumpkin and chocolate. I like. :) 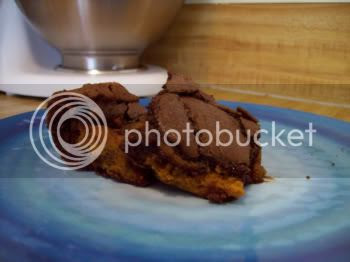 Beat pumpkin with milk, sugar, egg white, and spices until smooth. Set aside.

Whisk together flour, cocoa, baking powder, and salt; set aside.

Bake at 350F for 35-40 minutes, or until toothpick inserted near center comes out clean. Cool completely. About 36 brownies.
Posted by Kristen at 9:24 PM 2 comments:

1. This is the first time I've made a pie that wasn't pumpkin. Of course, the crust isn't homemade, because there's a horror story involving the makings of homemade crust (which I'm just not ready to share yet lol), but it is whole wheat and organic. ;) But I woke up yesterday morning and just wanted to make a pie. Odd.

2. Dave likes this better than I do. A whole lot better than I do. I had a few bites, and it was just kinda 'eh' for me. I looked up, his place was completely empty. And when I said I'd bring some in for Henelyne and Johanna, his words were "If there's any left by then." Very odd. I'm the sweets lover in this relationship. He's the cook, I'm the baker, simple as that.

Even with the apple peeling and slicing, the recipe was pretty easy to put together. Usually I save that job for Dave, but it felt nice, getting into the flow of peeling and what not. And it did make the apartment smell very nice and cozy. I'm just not a fan of the taste. I'm not sure what it is, if it's the sour cream or the combination of everything, but... I probably won't have any more of it, and I'm fine with that. :) 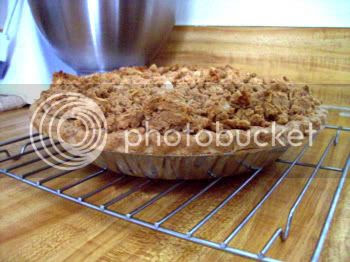 Bake at 350F for 55-60 minutes, or until apples are tender and topping is golden brown. Cool completely on wire rack. Cover; refrigerate leftover pie.
Posted by Kristen at 10:02 AM No comments:

Sadly, my previous recipe seems to have fallen by the wayside. I found this recipe on the Hershey website, I believe, and made it last Friday evening, to mail out to my parents.

Since I've been home, my dad's become a Brownie Addict. Of the 20 that were sent, my mom ate four of them. Granted, yes, my dad could stand to gain some weight, since the chemo and all, so it's not like he's going to be gargantuan. But my dad's the type that eats only because he has to. So the fact that he's needing to join Brownies Anonymous is a step in the right direction. :D

These are very rich and fudgy, judging by the one piece that I had before mailing. (It couldn't fit in the box, I swear!) Let's see... they got to MA on Monday and they were gone by Wednesday, I believe. Maybe a few survived until Thursday. I think that says it all. :)

No picture of these, but I wanted to make sure I got the recipe up.

Whisk together dry ingredients; set aside.

Beat sugar and butter until creamy. Add eggs, one at a time, followed by the milk and vanilla. Gradually add flour mixture. Pour into prepared pan.

Bake at 350F for 35-40 minutes, or until toothpick inserted near center comes out clean. Let cool on wire rack.
Posted by Kristen at 7:41 PM 1 comment:

I originally set out today to make Cranberry Cobbler Bars. But after my usual Friday trip to Whole Foods, I remembered to buy the cranberries, but failed to get the lemon. Oops. This is why I really should write a shopping list out more often than I do.

Thus began the search for a good cranberry recipe. When - quite suddenly - my brain decided to work for good, and not for evil. Amazing! LOL I remembered this recipe from Dorie Greenspan's Baking: From My Home to Yours.

I was hesitant at first. I don't often use the stove, and was convinced that somehow I'd mess it up. But something reared up inside and said, "Kristen, you can do this," and this time I actually listened. :)

It came out better than I expected. The sweetness of the cake and the tartness of the cranberries go well together. I think the only thing I'd change is maybe using brown sugar instead of regular sugar. But it's pretty, tasty, and I didn't ruin it. Go me! :) 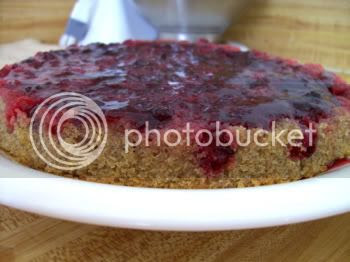 Directions:
Preheat oven to 350F. Place a 9-inch round cake pan onto a baking sheet.

Melt butter in saucepan. Sprinkle in sugar, stirring until mixture comes to a boil. Pour evenly over bottom of cake pan and top with cranberries, smoothing them out.

Whisk together flour, baking powder, cinnamon, and salt; set aside.

Beat butter and sugar until pale and creamy. Add eggs, one at a time, then vanilla. Slowly add half of the flour mixture into butter mixture. Pour in milk. Add remaining dry ingredients. Spoon over berries and smooth.

Bake at 350F for 40-45 minutes, or until a toothpick inserted near center comes out clean. Run a blunt knife along sides of pan/cake. Carefully turn out onto serving plate. Melt jam and gently pour over cranberries.
Posted by Kristen at 8:56 PM No comments: