Everyone has one of those cabinets where, no matter how hard you try, things just seem to get lost in there for some time, right? Right?? Comfort me here, okay? :)

So in an attempt to find something completely unrelated to baking, it was discovered that I still possessed a jar of peach preserves from Harry and David. They weren't there too long. Darcy (Dave's older sister) sent us a gift box from H&D for Christmas. So, they were still good. I bookmarked this recipe from Vegetarian Times probably around that same time, and somehow the two met in my mind in a moment that could only be described as fateful luck. :D

The recipe came together like a dream, with my only change being the addition of some nutmeg and ginger, figuring it would compliment the peach preserves. Which, yes, it did. When I took the pictures for this post, admittedly, I ate two of the display models afterwards. But what good models they were! ;) 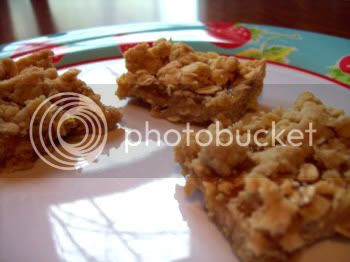 Sift together flour, cinnamon, baking soda, and salt in large bowl; set aside.

Cream sugar and butter until light and fluffy. Beat in egg and extracts until smooth. Add flour mixture to butter mixture; mix until combined. Stir in 1-3/4 cups oats. Spread 2/3 of batter on bottom of prepared baking dish. Spread peach jam over the batter with back of spoon. Add remaining 1/4 cup oats to remaining batter. Crumble over top of raspberry jam.

Bake at 350F for 30 minutes, or until golden. Cool completely on wire rack, before cutting into bars.
Posted by Kristen at 5:31 PM 2 comments:

As evidenced before, Dave loves cookies using the Heath Toffee and Chocolate Bits. These can and will be gone in no time. I offered to make something similar for him as a treat, but in bar form. I still can't trust myself not to overdose on cookie dough. When I feel that I can face the dough without devouring so much, then I shall make the cookies again. :)

This is based off an older Snickerdoodle blondie recipe, with the only main difference being the addition of the Heath bits. I think they taste wonderful. The brown sugar is very evident and the toffee flavor goes wonderful. Dave says it tastes like there's raisins in it. *shrug* Makes no sense to me. They're yummy as far as I'm concerned. 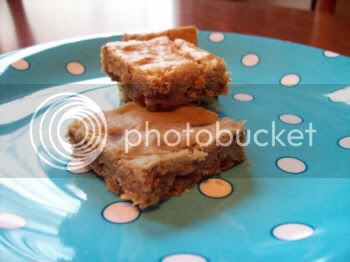 In a mixing bowl, beat together butter and brown sugar for 3-5 minutes. Add in the egg, then vanilla, beating until smooth. Gradually add flour mixture, beating until well blended. Stir in Heath Bits. Spread evenly in prepared pan.

Bake at 350F for 25-30 minutes, or until lightly browned. Cool completely on wire rack before cutting into bars.

After baking the previous recipe yesterday, I came to two unfortunate realizations:

1. I had like a quarter cup of brown sugar left.
2. There's no more vanilla.

Hmph. This does not make for a happy Kristen. So Dave's baked good was put on hold until next week. And it brings me to my "to try" folder on here.

After the incident that shall only be referred to as Exploding Butter, I just set the cream cheese on top of the still-lit stove for a bit. Probably should've left it there longer, but time was ticking as it's prone to do, thus my cheesecake layer isn't as pretty as Alpineberry's. It's okay, though. It's still deliciously rich, with Nutella in both the brownie layer and the cheesecake layer. And, really, who's going to argue with that? :D

(Oh, and I now have more brown sugar and some vanilla to hold me over until the good vanilla gets here lol) 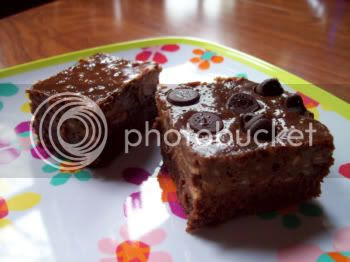 For brownie layer:
Combine butter, Nutella, eggs, and sugar in a large bowl, mixing well. Sift in flour and cocoa powder, and mix until well combined. Pour batter into prepared pan and spread evenly. Set aside.

Bake at 325F for 40-45 minutes, or until the cheesecake looks set. Allow to cool completely in the pan before cutting.
Posted by Kristen at 5:50 PM 4 comments:

So, sadly, my cupcakes the other didn't turn out the way I had planned. The taste that I was aiming for was faint, and the texture on the top was just... odd. It's back to the drawing board on that one.

This is an update post on a recipe I made a while back. Amelia's birthday is coming up, and this was her birthday request. The original was thought up during a 'cake break' at work. Aww, I miss cake breaks!

Anyways, the recipe is really simple, just a basic blondie with peanut butter and chocolate chips. Like a thicker cookie bar, if you use the recipe off the bag of Nestle's chips. :)

(No picture as the lasagna's almost ready! lol)

Bake at 325F for 30-35 minutes, or until a toothpick inserted near center comes out clean. Let cool on wire rack before cutting into bars.
Posted by Kristen at 2:03 PM 2 comments:

The other day, my mom comes up to me in a store, holding a jar of The Peanut Butter Co.'s Dark Chocolate Dreams (don't worry, we paid much less for it lol), saying that I should make brownies with it, like the Nutella ones that she so loves. I wanted to do something slightly different, thus this post and recipe. Based on this recipe, I switched out the unsweetened chocolate and then, obviously, used the peanut butter as the frosting.

If you make this, definitely don't overbeat, as I wound up with that kind of light crust on the top of the brownies, particularly on the edges. They do taste moister on the second day, and I actually liked them better then.

I'm curious about their other peanut butters. Anyone else use them? The cinnamon sounds particularly intriguing. Could this be the end of my love/hate relationship with peanut butter? *suspenseful music* Find out next time!

(Not really; I was just going for the dramatics. I've got something else planned for my next baking, and I'll even give a hint. It involves a soda that originated in Chicago in 1919.) :) 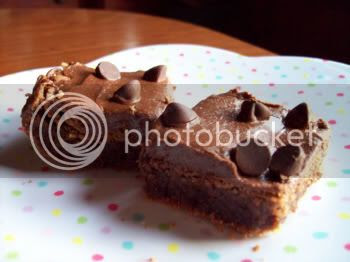 Melt chocolate and butter together, either on stove or in microwave. Let cool for at least 5 minutes.

Bake at 350F for 35-40 minutes, or until a toothpick inserted near center comes out clean.

Once out of oven for 15 minutes, spread the chocolate peanut butter on top, sprinkling with chocolate chips or nuts, if desired. Let cool completely before cutting into bars.
Posted by Kristen at 5:24 PM 2 comments:

Did everyone remember to change their clocks? (At least, those that do.) Normally the spring forward doesn't bother me, but I didn't get to go to bed as early as I liked. Thus six hours of sleep does not make for a happy Kristen. And this is dangerous, posting this now, seeing as my eyes are painful, but I've been procrastinating. Again.

Oh! Good news - my dad's home from the hospital. He was sprung loose on my best friend's birthday, coincidentally the day before his own. Also good - the weather this weekend.

After the six inches of snow last Monday, 60F weather was a very nice surprise on Saturday. Too bad there's more snow in the forecast for tomorrow. Poo. Anyways, when I woke up on Saturday, the sun was shining, the snow was melting, and I wanted something summery. And you know where that led to.

Found at one of my favorite blogs, Culinary Concoctions by Peabody, this is my second attempt at this recipe. The first time probably didn't even get blogged about because I was lacking coconut and it just wasn't a good thing. This time, all the ingredients were in the house. Woohoo!

---Okay, an email later, I'm back. Seriously, the procrastination is at an all new level tonight. So, where was I?

Alright. The recipe. Comes together really easily. Is a very dense blondie, almost bordering on a cake-like quality. The only thing I would change is upping the lime quantity, but that's just me and the Lime Monster talking. :) 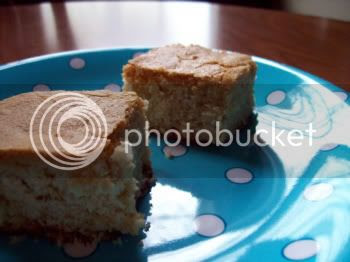 Beat brown sugar and butter until light and fluffy. Add eggs, one at a time, followed by the key lime juice. Gradually add the flour mixture, beating just until combined. Stir in shredded coconut. Spread in prepared pan.

Bake at 350F for 45-50 minutes, or until toothpick inserted near center comes out clean. Cool completely on wire rack before cutting into bars.
Posted by Kristen at 5:31 PM 1 comment: