When I somehow came across the Eat to the Beat blog event, one combining my love of baking and my love of music, I hoped that I would have the chance to participate. Timing ended up working with me for a change, instead of against, as it normally does. :)

The 'rules' were pretty simple: Make and blog about a food or drink that somehow relates to a song, an album, a band, etc. On Saturday, I became searching song lyrics, using my favorites as a start-off point. Stevie Nicks, Joni Mitchell, Bette Midler - none of them reference food that much. I thought about musicals, Spamalot coming to mind, but I really didn't want to work with Spam. LOL

I eventually was searching through Dixie Chicks lyrics, and came across their song Sin Wagon. Something clicked in my head. "Hey, people often describe certain desserts as SINFUL, maybe I can go with that..."

The first recipe I tried? Oy. It came out really soupy. This has not been a good week for first recipes. The firsts go horribly, but the second ones? Oh, the second one. I'll talk about that in a second. (No pun intended)

Of course, with Devil's Food cupcakes, there are like fifty million songs referencing the devil. But I went into this with Sin Wagon in my head and eventually on my cd player. :)

The batter was simply divine. I could've eaten it with a spoon. The ganache (my first ganache ever!) was the same. In fact, I did take a spoonful or two, because hey, it'd been a long day at work. ;) But, shockingly, I did not try a fully frosted cupcake until this evening. I let my guinea pigs go first, and they all loved it. Me? Oh my god. They taste professional. They taste like heaven. I want another already. :) 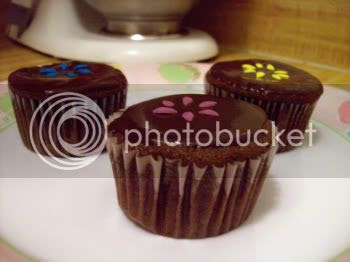 Directions:
In a bowl, whisk boiling water into cocoa until smooth. Add in milk and vanilla; set aside.

In a small bowl, sift flour, baking soda, and salt; set aside.

In a mixing bowl, beat together butter and sugars until light and fluffy. Add eggs, one at a time, beating well after each addition. Add flour mixture in batches, alternating with cocoa mixture; beginning and ending with the flour. Fill liners about halfway full.

Heat the cream until boiling, then pour over chocolate, stirring to melt, adding the corn syrup. Dip each cupcake into ganache upside down to get a good coating on it.

For the first of the Master Baker challenges, this month's ingredient was cinnamon. Easy enough, right?

No, Kristen wanted to do something different. After a week of searching for "the perfect recipe," I finally went with one of Dorie Greenspan's Cinnamon Chocolate Squares. For some reason, it didn't work out. When I lifted it from the wire rack to a plate, I discovered that the center part of the bottom, well, collapsed. Back to the drawing board.

I was stuck on the cinnamon/chocolate idea, and wound up using my small-batch brownie recipe with a tweak or two to it.

I think they're a good balance of the two flavors. I was worried at first about how much cinnamon to use, but it worked out. Finally, something worked out today! (Mother Nature impeded on my normal Friday routine. Hmph.) Dave tried one and his only words were, "They're cinnamon-y." LOL Mission accomplished! :D 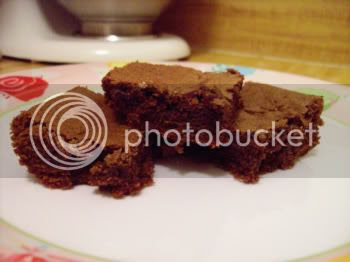 Bake at 350F for 20-25 minutes, or until toothpick inserted near center comes out clean. Makes 16 brownies.
Posted by Kristen at 8:58 PM No comments:

Woohoo! As of this afternoon, Something Sweet is officially one year old!

And in celebration, Dave and I bought a car. LOL Well, not really for the blog, but we did have to get one before moving, and we found a very good sale today. So yay for that. *insert celebratory cake picture here*

So I just want to thank Dave, my Guinea Pigs (Johanna, Henelyne, Amelia, and those others at work that sometimes get treats), and all of you wonderful folks that come visit here. And comments totally make my day. *hint, hint*

Since it was Valentine's Day and all yesterday, I decided to make Dave a giant heart-shaped cookie. It didn't go well, and that's all we're going to say on that subject!

A couple weeks ago, we were watching Good Eats (I have a huge non-sexual crush on Alton Brown.), and the episode was on peaches. Dave mentioned he really liked peach cobbler. Now, the boy may eat almost anything, but he's kinda fussy about baked goods (Don't tell him I said that LOL). So, anyways, I jumped on this knowledge.

I know fresh peaches would have been best, but they're not in season and were a bit pricey, hence the use of the frozen ones. In my defense, at least they're the Whole Foods brand of frozen fruit. ;)

Unfortunately, they didn't come out to be as pretty as I'd like them to be. In fact, if I based it off of what it looked like, I probably wouldn't have even eaten them. But we decided to go for it anyways, and I'm glad we did. It tasted a WHOLE lot better than it looked. Thankfully.

I found the original recipe over at Tartelette and altered it for my peaches.

Filling: Combine all ingredients in a medium-sized bowl. Divide between four rammekins. Place the rammekins on a baking sheet, in case the fruit spills over. Set aside.

Topping: In a bowl, combine the flour, sugar, and spices. Add the butter, cut in small pieces, and mix with your fingertips until it appears crumb-like. Sprinkle evenly over the dishes.

While on a "cake break" at work with Johanna and Amelia on Tuesday, Johanna suggested I make the above-named recipe. With very firm instructions, including, "no added mint whatsoever!" (As a side note, despite how weird it sounds, peanut butter and mint cookies are quite yummy)

I work well with requests, so long as they're within reason. I have like two feet of counter space, so a lot of things are just because I simply don't have the room. (One day!) Anyways, I didn't have anything in mind to make this week, so I went for it.

After some searching with no luck, I hit the jackpot at one of my favorite blogs: Culinary Concoctions by Peabody. I can't remember how many times I've been inspired by something she's made. And I've even learned a little bit about hockey, too. ;)

The taste, you ask? Pleasing. I'm currently in a good period with ol' pb. The white chips at times are too sweet (so I lessened the sugar in the recipe a bit), but that could just be me. I'd prefer it with either milk or dark chocolate, but hey, it is a request.

And I just realized I need to bring my camera to work on Tuesday, to get a group picture of my Official Guinea Pigs. :D 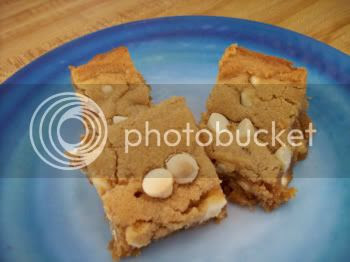 Cream butter, peanut butter, and sugars until smooth. Add egg and vanilla, mixing well. Stir in white chips. Spread into pan. If desired, sprinkle some of the remaining white chips on top.

Bake at 325F for 30-35 minutes, or until toothpick inserted near center comes out mostly clean. Let cool before cutting into bars.
Posted by Kristen at 8:05 PM No comments:

I had a really hard time this week, figuring out what to make. By last night, I narrowed it down to two: this and a lemon pound cake. Obviously you can tell the winner. ;)

This is my first recipe that's by Ina Garten. I know some people swear by her brownies, and I've seen the lemon yogurt cake on many a blog. But the idea of blueberries and lemon sounded really good. A bit of history: for years and years, I said that I didn't like lemon-flavored foods. Probably for about twenty years I said this. Why? Because I hadn't ever tried any. There are still a long list of foods that I say that I don't like, even though I've never tried them. This is why I bake and not cook. Just kidding. But, really, there is a mental list. Don't judge me too harshly, okay? I was sheltered as a kid. (But that's a whole 'nother post!)

Onto the good stuff. This batter is so good. I could've easily just sat there with a spoon and ate it from the bowl. Post-baking, it didn't have the lemon flavor that I wanted, but is still yummy. Light, but moist. I'm a little sad my blueberries sank, despite the flour, but oh well. Doesn't affect the taste, obviously. I'm curious to try this with other berries as well. Perhaps when it's more of the berry-season. :) 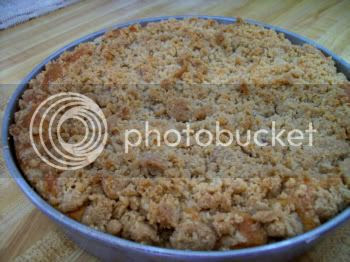 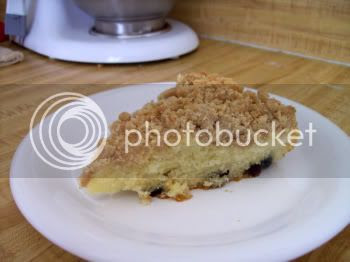 Directions:
Preheat oven to 350F. Butter and flour a 9-inch round baking pan.

For the streusel:
Combine the granulated sugar, brown sugar, cinnamon, and nutmeg in a bowl. Stir in the melted butter and then the flour. Mix well and set aside.

For the cake:
In a medium sized bowl, sift together flour, baking powder, baking soda, and salt; set aside.

Cream the butter and sugar in the bowl of an electric mixer fitted with the paddle attachment on high speed for 4 to 5 minutes, until light. Add the eggs 1 at a time, then add the vanilla, lemon zest, and sour cream. With the mixer on low speed, add the flour mixture to the batter until just combined. Fold in the blueberries with a spatula. Spoon the batter into the prepared pan and spread it out with a knife. With your fingers, crumble the topping evenly over the batter.

Bake at 350F for 40-50 minutes, until a cake tester comes out clean. Cool completely.
Posted by Kristen at 5:07 PM No comments:

Life is back to normal. Or at least as normal we get around here. We had a nice visit up to Oregon. We even had more snow than we did through the Grapevine down in the LA area. There were some steady flurries through the Mt. Shasta area, which was fun. And I stepped in snow for the first time in five years. (Yeah, it's no big deal to some, but it's been a while for me!) We ate some very yummy breakfast in Ashland at Morning Glory, whose decor and general feel was very inspiring. Their cranberry/walnut french toast was delicious. :)

Anyways, this totally wasn't what I planned on making today. But as I was walking back from the library, I saw the local UPS driver, and that got me thinking. (Background: Used to work in receiving, got to know John, and even though I'm not in receiving anymore, I still live on the route) Long story short, he owes me some oatmeal cookies. Which led to "Could I do a cheesecake bar with an oatmeal cookie crust?"

The Quaker Oats website was my friend today. I found both the crust recipe and a cheesecake recipe that I was able to alter to my liking. The crust isn't as moist as I'd like it to be, but other than that, it's alright. I'm very glad I went with just the half tablespoon of cinnamon extract (found it at Sur La Table) instead of a full tablespoon, otherwise it'd would've been WAAAAY too much cinnamon. Even I have my limits! ;) 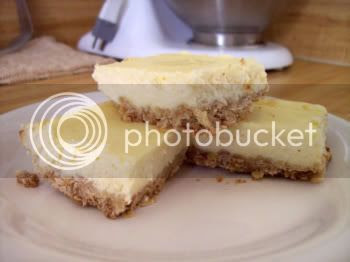 Combine oats, flour, brown sugar, and baking soda. Add butter, using a pastry blender or forks to combine. Press onto bottom of pan. Bake for 10-12 minutes, or until lightly browned.