The first time I ever had a madeleine cookie was in January 2001, having gone with a friend to the Starbucks in Providence, RI. It was also my first Starbucks trip, too, because even still, back home, Dunkin' Donuts is EVERYWHERE. Within five miles of my parents' house, there's easily six or seven of them. While out here, in that same distance, there's the same amount of Starbucks. Actually, wait, it might be closer to ten. And that's where my loyalty lies, because I <3 chai tea. ;)

I digress. At the first bite, I was amazed by the flavor that came out of this shell-shaped cookie. Light and buttery and just wonderful. After much coveting, I received a madeleine pan for Christmas one year. But, like many ventures in life, I was hesitant because I was worried they wouldn't come out good. I decided to conquer that fear yesterday.

The recipe is from the Williams-Sonoma Cookbook with a Guide to Kitchenware, according to the printed recipe that was taped to the pan itself. I had my concerns, and even "consulted" with Dorie, but went with the WS recipe in the end, minus the orange-flower water.

And the results? Light and buttery. Slightly crispy on the outside of a few, but that's due to the butter on the pan, I'm thinking. Henelyne was here while I was making them and she tried one when it was still warm and LOVED it. She had never heard of or seen a madeleine before; her words were "it's crisp on the outside and soft on the inside - it's like it has its' own full edge!" (She's an edge-girl when it comes to brownies and bars).

So yay! I made madeleines and they didn't suck! LOL 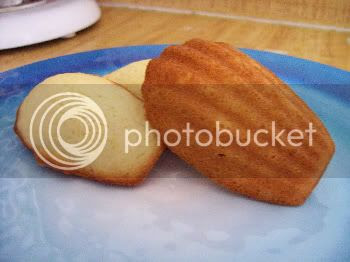 Directions:
Preheat oven to 375F. Brush a little of the melted butter in the molds of madeleine pan. Reserve the remainder and let cool to lukewarm.

Sift the flour, baking powder, and salt into a bowl. Combine the egg, lemon zest, orange-flower water, and sugar, and beat lightly. Stir into the flour mixture and beat until well combined. Add the reserved butter and beat just long enough to incorporate thoroughly without over-mixing. Spoon the batter into the prepared molds, filling each one half-full. Place on the middle shelf of the oven.

These look great and I love the edges of brownies and bars to so these look right up my alley!

Robin, I'm definitely a fan of RI. I'm from New Bedford, MA, and Providence is much faster to get to than Boston. LOL I'm looking forward to being back home soon and exploring again. :)