So I kinda forgot that I had another package of strawberries in the fridge when I bought two more. They were on sale and I'm a sucker for strawberries, what can I say? I started thinking and somehow the Lime Monster came in my mind and decided upon these cupcakes.

But then the Lime Monster started getting greedy. He didn't want strawberries in HIS cupcakes. He convinced two of the berries to off themselves by rolling off the cutting board and onto the floor of despair. Worry not, dear readers, I fought the good fight and assigned both the Lime Monster and the berries to some joint counseling, where they worked out their differences and now live together, peacefully, in cupcakey bliss. It's a tough job, but somebody's gotta do it. :)

I used the margarita cupcake recipe, minus the tequila, since those had more of a lime taste, and used the icing from the original lime cupcakes. They came out good. Dave even ate two, shockingly enough. The lime taste is subtle on the outer rim, but overpowered by the berry in the center. So it's like two cupcake flavors in one. I tried to get a picture of the cupcake split in half, so that the strawberry would be visible by it didn't come out well. The berry made the icing get runny and it just wasn't a pretty picture. 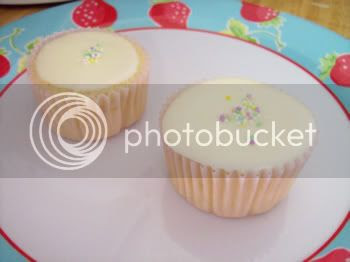 Beat sugar, lime juice, zest, milk, oil, and vanilla until combined. Add in flour mixture, beating until incorporated. Fill cupcake liners about 3/4s full, then place berry in center of each one.

Bake at 350F for 18-22 minutes, or until a toothpick inserted along the outer edge of the cupcake comes out clean. Let cool completely on wire rack before icing.

Mix butter, milk, and lime juice until combined. Add sugar, 1 cup at a time, beating until smooth.
Posted by Kristen at 10:22 AM

Perfect! I have a container of strawberries waiting to be used up. Thanks for a great recipe.

These look pretty and delicious! I love lime :)